You can stay fit and healthy regardless of your age 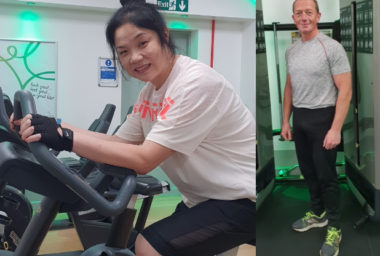 TWO Horncastle gym goers have spoken of the importance of people increasing their health and fitness activity as they hit mid-life age.

With very different backgrounds, Ching Cao and Gary Young both want to promote the benefits of making sure people who are approaching or just past 50, look at ways in which they can stay healthy as they get older.

Latest health statistics from Lincolnshire show how, in the East Lindsey District, life expectancy is lower than the national average with levels of excess weight and deaths from cardio-vascular disease both higher than the UK average. Cases of Type 2 diabetes are also worryingly high in parts of the district.

For Ching, 49, it was the perils of working in her family’s restaurant and hitting mid-age life that was the spark for her to seek a more active lifestyle.

Ching had also developed a medical condition that meant constant medication and she found herself putting weight on and realised that she needed to do something about it.

“Due to my commitments in the restaurant, I work from around 4pm until 11pm and would often wait to eat until very late, which was not good at all,” admitted Ching.

A change of diet and the timing of her meals along with regular visits to Horncastle Pool & Fitness Suite has seen Ching lose an impressive two stone in just eight months – and she is determined to keep going.

“I feel so much better and this is something I am not going to give up on,” she added.

Gary has a different story to tell. The 56-year-old was a chef in the Armed Forces and served 22 years. He had always kept fit and prior to injury was a keen runner. However, he now finds the gym a great way to keep in shape – and he urges others to give it a try.

“It’s good for you, it’s as simple as that. There is also a social element to it, you come in and see the same faces and say hello, which is good for everyone’s mental wellbeing as well as the physical side,” said Gary.

In a bid to support people to live a healthier and greater life for longer, the team at Horncastle Pool & Fitness are inviting people to pop in or call to book a free Body Composition Test. They also offer a 3-day free trial.