The best in the world 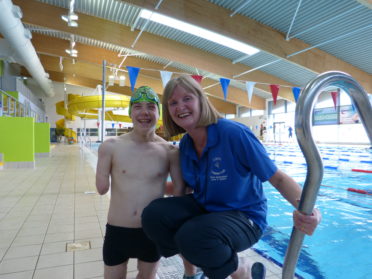 The best in the world – and teenager Harvey Phillips will be making East Lindsey proud, when he competes at a major international event this week.

Harvey, 14, his coach Sarah Richardson and Dad Darren have travelled to Glasgow for the British leg of the 2019 Para Swimming World Series, which starts on Thursday and runs over four days.

This year the Series’ is the largest ever. Taking place in seven countries across four continents, it brings together the world’s best swimmers, who pitch themselves against each other in a variety of competition, which are based not on age, but disability category.

For Harvey, from Louth, this represents a major milestone in his ambition to be of Olympic standard by 2024 – he was hoping to make Tokyo next year, but a summer arm operation may put that dream temporarily on hold.

“I have to be realistic and it would be great to go next year, but I think my aim now is for 2024,” said Harvey, during a break from his training with the Louth Swimming Club at Meridian Leisure Centre, which is operated by the Magna Vitae Trust for Leisure and Culture.

“Harvey is an inspiration and it is as simple as that. He is living proof that anything is possible if you work hard at something, you can achieve anything you want. This is all down to him, he is so determined and never gives up,” said Sarah, who the family refer to as Harvey’s ‘second mum’.

His parents Darren Phillips and Lisa Chappell, along with his older sister Kayla, have been a constant support in helping Harvey to help himself – and making him realise that his disabilities do not have to hold him back.

As they watch him at his training session with volunteer club coach Sarah, Darren said: “In the early days it was perhaps what you may call ‘tough love’. We turned a lot of things down, like a stair lift for the home, because it was our feeling that Harvey would not have such a lift everywhere and he needed to learn to cope with that.

“Now we see him today and know that was the right thing to do. He is doing this for himself too, we have never forced him to do anything. What he is doing is fantastic,” added both Darren and Lisa.

The Louth Academy student enjoys the skate park and football, but swimming proved to be his passion – after learning to swim at Meridian as part of the centre’s extensive swim programme, he advanced to training with Louth Swimming Club (The Dolphins) four years ago.

Now on the Junior GB Development Programme, Harvey has received some Lottery funding, via Sport England’s ‘Backing the Best’ programme to help with training and competition costs.

Praising Harvey, Magna Vitae’s Chief Executive Mark Humphreys said: “He is a shining example of the values that are held by everyone here. We set out to help everyone to live a great life, with no barriers and we are delighted to have a champion like him in our centre.”