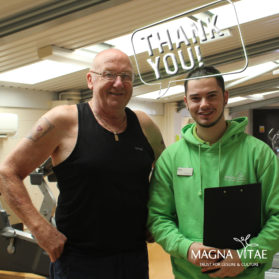 From picking up the bins to picking up tins of beans and using them as weights in his kitchen – retired refuse collector Stephen Smith is finding new ways to keep fit and healthy.

Stephen, 66, has seen his life transformed after leaving work and then suffering a shoulder injury back in the summer of this year.

Wanting to remain fit and be inspired to follow a sensible diet, Stephen turned to Mablethorpe’s Station Sports Centre and was introduced to Lifestyle Consultant and Personal Trainer Ros McCarthy – and he has not looked back.

With attention taken to ensuring Stephen recovered well from his injury, Ross provided a bespoke programme and recommended home exercise too.

“For me retirement has not meant stop. It only takes one lift to get out of your chair and do something,” said Stephen.

“Now I find myself doing ‘weights’ with tins of beans in the kitchen when Ross is away and I still need to keep going,” he laughed.

It has not just been the exercise that has helped, Stephen is also much more aware of what he puts into his body. His coffee intake has dropped from as many as 25 cups a day to just five and he is much more aware of having to ‘work off’ what he eats.

“I am cooking from scratch much more and recognise the need for a sensible diet while staying active,” said Stephen.

And finally, he had a word of advice for people considering joining Station Sports Centre: “Coming through the door is the first step of the rest of your life, and I would advise anyone to just do it,” he added.