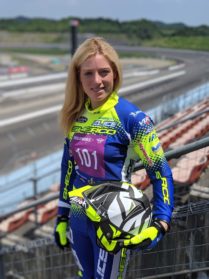 The world championships in Japan saw two fantastic wins for Emma Bristow – the Lincolnshire lady who continues to dominate the sport of motorcycle trials across the globe.

And when she’s not out on her bike, the 28-year-old from Alford loves coming to Meridian Leisure Centre, where she is able to complement her targeted training with exercises that really help her. And she has given a big shout-out to our Virtual classes, which she says are great!

Emma has been riding high in the trials’ arena since the age of just 16 when she gained a ninth placing in the 2006 World Championships. Currently reigning GP Women’s World Trials Champion, her 2019 campaign started in Japan this month (June) before heading to France and Portugal for the next two rounds.

And it couldn’t have gone better, with the star taking two podium spots.

“I couldn’t be happier with the results from the world championship opener, taking two wins out of two,” said Emma.

The sport has taken Emma onto the international stage – a hobby encouraged by her parents when she was only four years of age, before her obvious skills saw her climb the ladder, attracting a run of sponsors and turning professional. 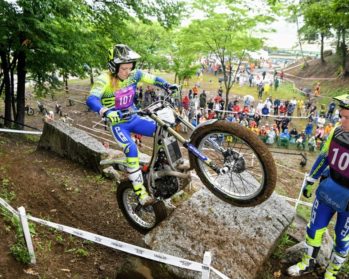 Taking a break from competition between Japan and the European rounds in a month’s time, Emma called in to Meridian where her membership is ‘invaluable’ – giving her the fitness advice and training she needs to complement what she does on the machines themselves.

With the bikes weighing 70 kilos, Emma explained how core strength was vital to her, along with building and retaining her strength and endurance, especially as the British Championships are mixed competitions.

“It is a fact that men have more natural physical strength and to compete on that level I have to ensure I maintain and continually improve my fitness in all areas. The power and explosiveness have to be there,” she said.

A specific programme has been recommended to her at Meridian to work on these specific areas, along with whole body exercise. This has been developed by the Lifestyle Consultants at the centre.

“The centre is 15-minutes from home and coming two or three times a week is ideal, we are very lucky to have this centre in the town and I love the virtual classes that are now running too,” said Emma.

“I will continue to train hard with the help of Meridian and I’m motivated to continue the good results,” she added.

Training, either in the gym or on the bikes, takes place six days a week and lasts up to four hours, and that has been the case since her competitive career began. As with many teenagers, she had a hard decision to make when she left sixth form – whether to pursue her sporting dream or go down the academic route.

“I could have gone to University, but I just didn’t know what I wanted to do and was not going to embark on something that wasn’t right for me. I look back and have no regrets.” 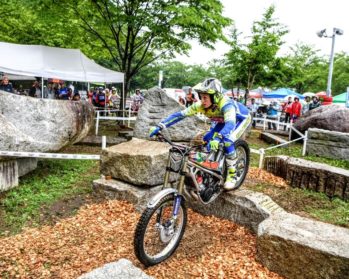 Married to James Fry, a fellow enthusiast, the couple are completely immersed in the sport and support each other.

“We love it. And while I know I have been lucky to follow my dream, it is like everything in life – you must work hard and do all you can to do well in your chosen area, whatever it may be,” said Emma.

While it may be assumed that Emma, a solid professional for many years, would be completely confident in her abilities to perform, there is always that nervous determination to succeed.