Sparks will fly at Mablethorpe Illuminations 2019

Sparks will fly once again, as our much-loved seaside resort prepares to host an evening spectacular of fantastic music, flames and fireworks for the annual Mablethorpe Illuminations!

This year’s family-friendly event, on Saturday July 27, will feature the very best talent our region has to offer, providing a platform for local artists to perform alongside internationally renowned FlameOz. 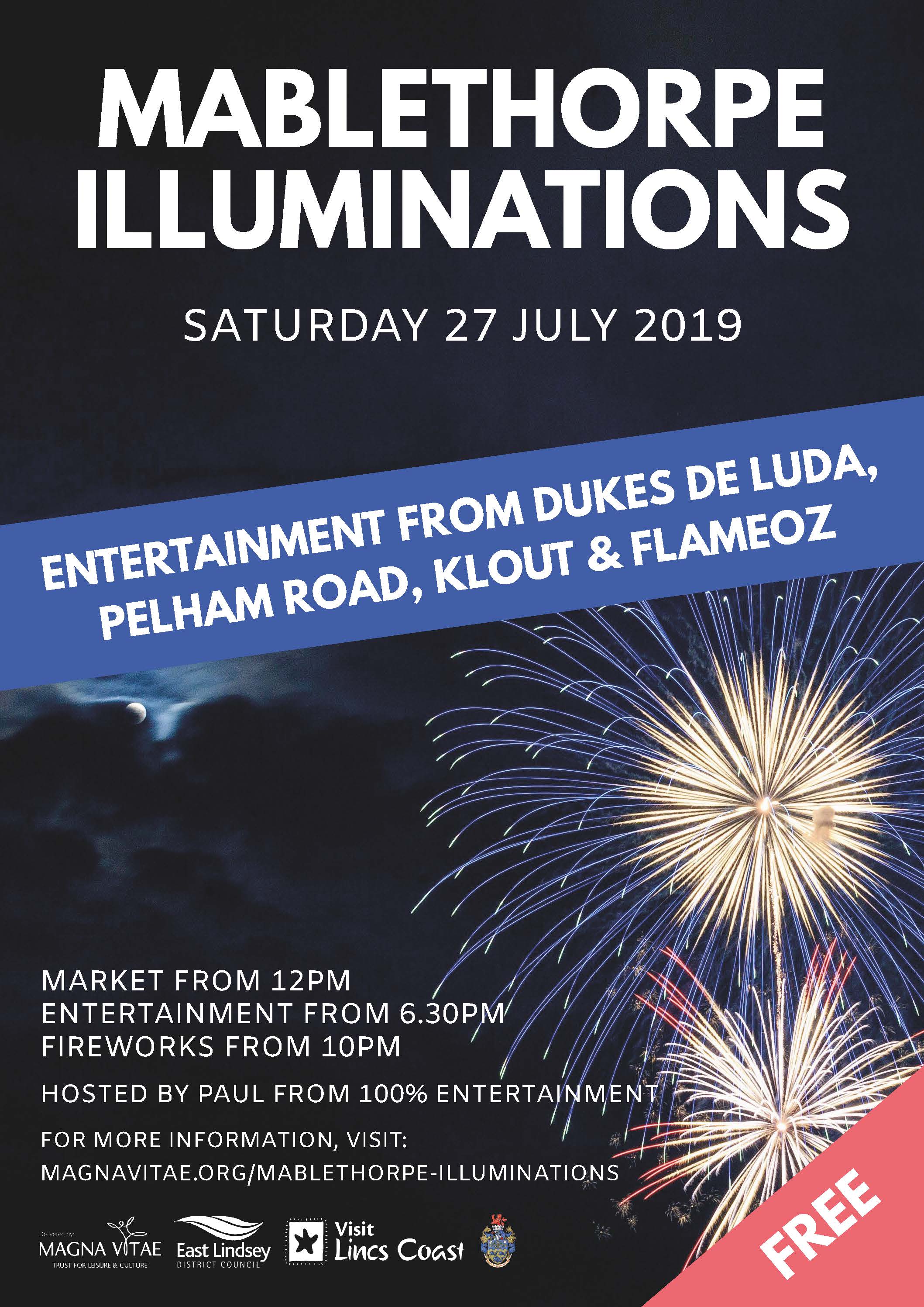 Experienced functions band, Pelham Road are next on the bill, covering popular songs from the 1950s right up to the present day. During their slot, vocalist Nicola Thompson and her bandmates Murray Gissing (guitars and backing vocals), Aaron Downing (bass guitar) and Daniel De Wit (drums) will perform songs from their eclectic repertoire, including music from Adele, The Killers, Bruno Mars, The Cranberries and many more!

Local indie covers band, Klout, will be the final musical act of the night, putting their 12 years of experience into practise and inviting the audience to sing along to hits old and new! Band mates Kev McDonald, Kenny Parsons, Andy Parker, Gareth Price and Jon Hammond initially started out as old school friends in Louth, before gaining a loyal following touring the pub, club and event circuit all around Lincolnshire.

The evening’s entertainment will finish with a show from the UK’s premier fire act, FlameOz.  The company’s expert artists will perform an award-winning mix of perfectly choreographed, high-impact fire dance; skillful circus artistry; unique fire-based effects and stunning imagery to a funky, emotive and climactic soundtrack, which promises to leave viewers awe-struck!

Compère Paul Wood from 100% Entertainment will be taking the reins for the night, leading the audience through this year’s eclectic line-up of local bands and spellbinding fire dance before the grand finale; a spectacular firework display with the Illuminations as the backdrop. 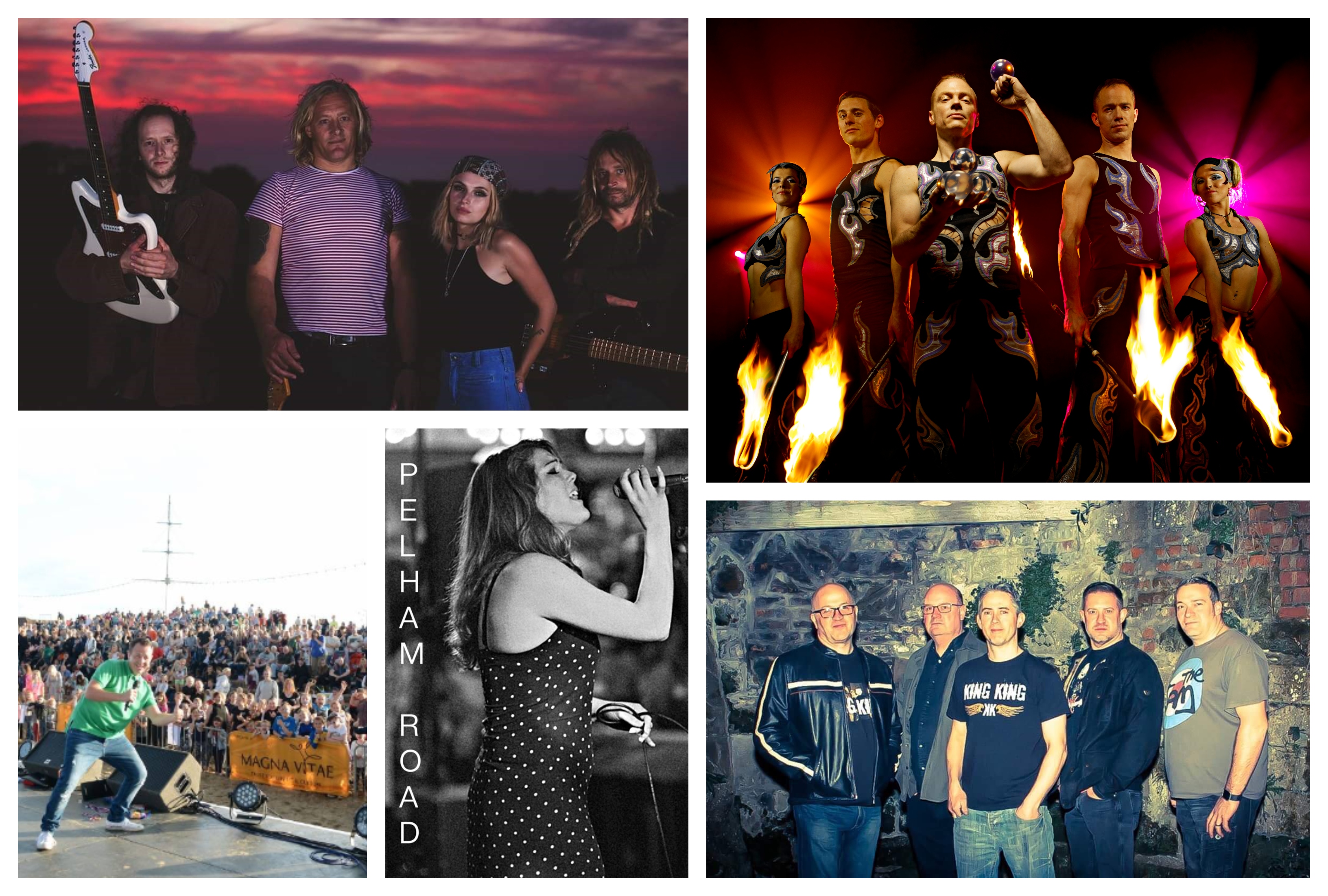 Of his return visit to Mablethorpe, Paul said: “We’ve had such an amazing time hosting the event over the last couple of years. It’s a great day for us, there’s such a great buzz and atmosphere around the place. What makes this event so special for us is so many people of all ages coming together and just enjoying themselves to the absolute maximum. The whole place has such a fun sense of humour.”

The illuminations are organised annually by the Magna Vitae Trust for Leisure and Culture with support from East Lindsey District Council and Mablethorpe and Sutton Town Council.

“We are delighted to be bringing the illuminations event back to Mablethorpe again. Last year saw over 4000 people attend with some unfortunate poor weather, however we are hoping to see more people this year” said Mark Humphreys, Chief Executive of Magna Vitae.

Mablethorpe and Sutton Town Council will be supporting this year’s event with a street market on the High Street from 12pm to 6pm, before the Mayor of Mablethorpe, Sutton on Sea and Trusthorpe, Cllr Carl Tebbutt, opens the evening’s entertainment at 6.30pm.