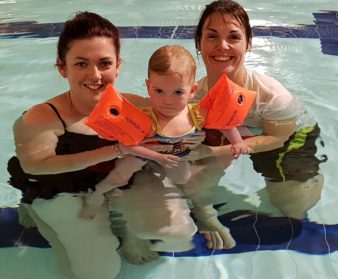 WATER baby Maisey Foxwell will be able to thank her family for ensuring that she is a competent swimmer as she grows up – but the toddler is one of a shrinking number of youngsters who are learning this life-saving skill.

Latest figures from the Amateur Swimming Association reveal how one in three children now leave primary school unable to swim – up from the previously reported figure of one in five.

The research, which was carried out in conjunction with Kellogg’s, revealed that around 200,000 children will leave primary school unable to swim, amounting to an astonishing two million non-swimmers over the next ten years. Figures also reveal how more than 400 people drown each year in the UK, and that drowning is the third most common cause of accidental death in children.

Maisey and her mum Rebecca joined pool instructor Donna Smith in encouraging other parents to take the plunge when it comes to ensuring their children are confident in the water. The toddler, now 16-months, has been taken to Skegness Pool and Fitness Suite and its newly-refurbished indoor pool since she was just seven-weeks-old.

“I have always seen this as part of Maisey’s learning and progression. You can see how confident she is becoming and this is a vital skill that every child should learn,” said Rebecca, whose young daughter has now completed her Discovery Ducklings Award.

Donna works as one of a number of experienced swim instructors employed by Magna Vitae to offer tuition at all levels and for all abilities – from the one-to-ones for any age, to the Ducklings Awards and the WaterWise Learn to Swim classes, which follow the official Swim England framework for children and adults.