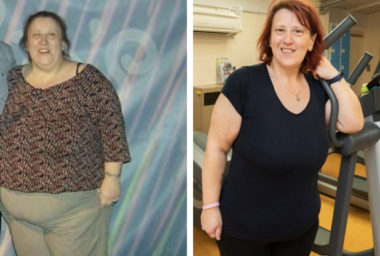 From more than 22-stone to a trim 12st 13Ibs, Sharon Harper is a shadow of her former self and she wants to tell others that if she can do it, then so can they!

Sharon, from Sutton-on-Sea decided enough was enough when she hit the age of 40 and found herself in hospital fighting viral meningitis – and when her blood pressure was checked it was almost ‘off the scale’.

“They actually told me that I should have been dead,” said Sharon, who said her weight started to increase as a teenager, however the pounds really started to pile on after having children.

“I was always active but was eating the wrong kind of foods and just not doing enough,” she said.

With a slimming club joined, Sharon started to follow the advice of dieticians, with a healthy diet and treats ‘in moderation’. That was then coupled by new membership at Mablethorpe’s Station Sports Centre and she has never looked back.

In fact, Sharon did get down to the weight required for a gastric band to be fitted but refused, preferring instead to do it herself.

“Yes, of course it has hard to start with, but you build up and now I am here around three times a week. I am delighted by what I have achieved, and it has so many health benefits, in fact my tablets for blood pressure are now being reduced.

“I truly believe that if I had not taken action, I would have not seen my 50th birthday,” adds Sharon.

Sharon is also supporting our ‘New Year: New You’ campaign – we are using the start of 2019 to highlight the need for people to get active more often – and with obesity levels among adults in East Lindsey running higher than the UK average, we want people to join us and fight the fat!

Did you know? Being overweight or obese is a major public health crisis due to its association with serious chronic diseases such as type 2 diabetes, heart disease, stroke, liver disease and some cancers. Obesity is estimated to be the third largest risk factor contributing to premature deaths in the UK.

4 Don’t ban all foods, just moderate and use a smaller plate!

5 Get active, our MV Lifestyle Consultants will help you every step of the way.