Making a splash: juniors Dolphins dive into the Regional Final.

For the fifth consecutive year, swimmers aged nine to-12 years from Louth Swimming Club travelled to Leeds for the Northern Regional Final, after their victory in the Lincolnshire League final.

Having triumphed over local teams including Lincoln Vulcans, Lincoln Trident, CADS, Scunthorpe and Grantham, on Sunday October 6, a jubilant coach full of supporters and swimmers made their way to John Charles Leisure Centre in Leeds to compete in the final against clubs from Leeds, Stockport Metro, Southport, Leamington Spa and Newcastle.

All of our Louth swimmers performed amazingly well, with great swims from Louth newcomer, 11-year-old, Evie Dickinson who came second in her age group and third in the 12-year age group, in the 50 metre backstroke.  Ten-year-old Helena Field came third in the individual 50 metre front crawl and breaststroke.  Harry Milne (11) also gained third place in his 50-metre front crawl and first timer in this team event, Sophie Cooksey (nine) also achieved third in her 50 backstroke.

There was also success for the girl’s nine-year-old front crawl 4×25 relay team and the 11-year-old 4×25 medley relay team (backstroke/breaststroke/butterfly and front crawl) who both gained epic third places in their respective races.  Louth swimmers also gained a very respectable fourth place in a further eight races. 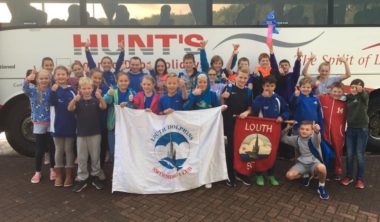 All of the swimmers and supporters thoroughly enjoyed the trip to Leeds, with supporters being in fine voice and enthusiastically cheering on the young Louth swimmers. Team Manager, Charlotte Elliott-Wright remarked on a fantastic team of swimmers, and that the Club is incredibly proud of them and this major achievement in the swimming year, against Clubs from cities such as Leeds and Newcastle.

The club trains at Meridian Leisure Centre and for more details go to www.louth-dolphins.org.uk