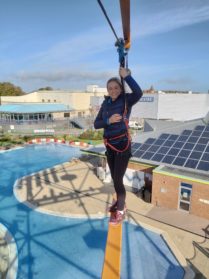 MUM-of-two and young onset dementia campaigner Hannah Mackay has conquered the heights of Skegness’ biggest and best new visitor attraction as she tours the UK for ten days of fun challenges – raising awareness and funds for Alzheimer’s Society.

Hannah hit the national news on October 3 when she flew to Guernsey for her first challenge. A few days later, she had reached the Lincolnshire coast and Skegness where her challenge was to complete Altitude44, including ‘the drop’ – the abseil from the top to the bottom of the 21-metre structure.

Hannah, just 36-years-old and a police officer in West Sussex, was spurred to act after tests confirmed she has a gene that will lead to the development of frontotemporal dementia (FTD). It is the same condition which both her father and grandfather developed in their mid-50s. While she initially knew there was a 50-50 chance of it developing, the follow up tests sadly confirmed it was a certainty

Knowing that her children may also be at risk from the condition, Hannah’s mission is two-fold – awareness and fund-raising, but also to make memories.

‘What I want to get across to dementia patients and families is that life is for living. It’s about creating memories,” said Hannah. Following her Altitude44 adventure, she was heading to Cambridge to visit the Dementia Research Institute and speak to researchers.

Of her sky-high challenge, she said: “I am terrified of heights, but I love a challenge and so I was really quite excited. This is different to anything else I have done.”

Altitude44 manager David Sneddon was delighted to accompany Hannah on her high wire climb: “By raising awareness of her condition, Hannah is also promoting the benefits of people getting out and about, having fun and enjoying themselves in safe environments. Here at Altitude44, this is exactly what we wish to achieve – families of all ages and abilities having fun and taking part together.”

Altitude44 is managed by the Magna Vitae Trust for Leisure and Culture, which itself has a strong community arm with a focus upon supporting people living with dementia in East Lindsey, along with their relatives and carers. Just this month its ‘Still Me’ project, which has engaged with more than 500 people in the community, has been shortlisted in the Alzheimer’s Society Dementia Friendly Awards 2019. For more on Still Me, which is supported by Louth and District Hospice, go to www.magnavitae.org